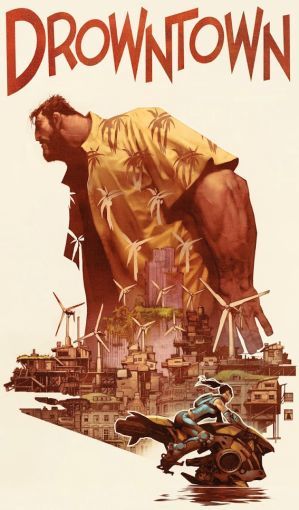 Drowntown is a graphic novel by Robbie Morrison and Jim Murray. It could be described as a mix of Science Fiction (perhaps Bio Punk) and Fantastic Noir. The setting is a future London that's now partly flooded thanks to climate change, and which is now home not just to humans but genetically enhanced animals. The story is split between two time periods — in one, a bodyguard and detective named Leo Noiret gets hired by an amnesiac underworld figure to investigate her origins; in the other, an aqua-courier named Gina Cassel becomes involved with the heir to a powerful Mega-Corp
Advertisement:

Drowntown is expected to be released as three books. The first was released in the UK in 2013, while the other two are still forthcoming.