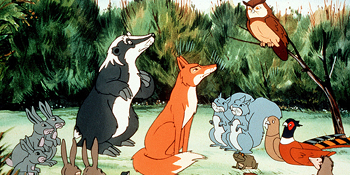 Yup. These guys do not intend to eat each other.
Advertisement:

Sometimes Woodland Creatures or other animals are in deep trouble. Their home has been destroyed and/or they want to build a stronger and better one. Sometimes they have to because Humans Are the Real Monsters, but it can also be because Mother Nature screws them. Such an alliance can lead to Carnivore Confusion because they are herbivores and carnivores working together, which can lead to problems within the group.

Sometimes an group of animals just belong to a group because it's normal, like a wolf pack or a deer herd. That is not this trope.

A piece of media fits this trope if it has the following: