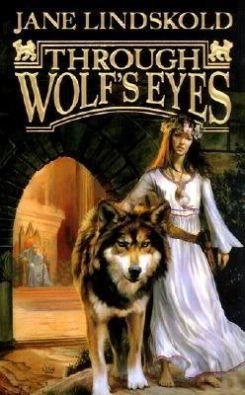 The Firekeeper Saga by Jane Lindskold is a fantasy series based around a Wild Child girl who was raised by wolves and brought back to human society. Where it would usually appear as your standard High Fantasy, the author has twisted the standard setting a lot and eliminated most of the Worldbuilding Non Sequiturs usually found in the genre.

The main character is Firekeeper, a.k.a. Lady Blysse Norwood, who was raised by wolves following a fire in the settlement she grew up in. However, said wolves were Royal Wolves, a species as intelligent as humans and able to communicate with each other and the other Royal animals. When she was adopted by human aristocrats, she gained her other, more formal name.

She has a Talking Animal companion, the wolf Blind Seer, so named for his unusually colored eyes. He often functions as a mild Deadpan Snarker, making fun of the humans who can't understand him behind their backs.

Her human friends include Derian Carter, a businessman's son and later counselor to King Tedric; Lady Elise Archer, heir to a barony and rather tougher than she usually looks; Sir Jared Surcliffe, a.k.a. Doc, a minor nobleman and not-so-minor doctor; and a whole host of others.