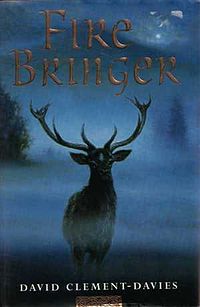 When the Lore is bruised and broken,
Shattered like a blasted tree
Then shall Herne be justly woken
Born to set the Herla free.
—Herla Prophecy
Advertisement:

Fire Bringer is a xenofiction novel written very much in the vein of Watership Down, but David Clement Davies's tale features red deer in Scotland during the Dark Ages.

The story begins with the birth of the fawn Rannoch on the night his father is murdered by the forces of Drail and Sgorr, a tyrannical pair of deer who have forbidden the yearly play of antlers that ensure a change of leadership. A prophecy surrounds Rannoch's birth: he will become the savior of the deer. If he survives the insane dystopian army in pursuit of him...

Dark, beautiful, and rich in Anyone Can Die, the story's more fantastic elements, namely the epic clash between good and evil, are firmly rooted in the nature of deer.

The spiritual sequels, The Sight and Fell, feature wolves, but are set in the same world as Rannoch's story (albeit in Transylvania).

Not to be mistaken for the other xenofiction series about bringing fire.