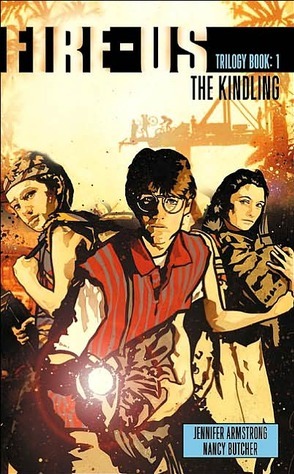 The Fire-Us Trilogy is a young-adult post-apocalyptic series by Jennifer Armstrong and Nancy Butcher. The books in the series are The Kindling, The Keepers of the Flame, and The Kiln.

In the year 2002, a mysterious illness explodes through the world, spreading panic and killing adults with a horrible, incurable fever. Only children survive the initial outbreak. Most, having lost their protection and being too young to protect themselves, fall to wild animals or hunger. But in Lazarus, Florida, a small group of lucky (or not-so-lucky) children manages to find each other. They form a family, scavenging everything they need to live from the ruins of Lazarus for years, believing they are probably the last people alive.

After five years, their simple life begins to fall apart. Their town has been picked almost to the bone. Two small children suddenly appear on the streets, apparently with no one to take care of them. A teenage boy knocks on their door, saying things no one understands that may or may not be from the "before-time". He uproots the family, dragging them with him on a quest they don't understand, away from Lazarus, in a madman's search to find Washington and the enigmatic "President".