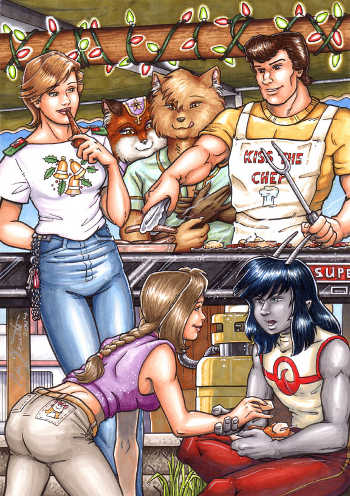 Clockwise from bottom right: Terinu, Gwen, Leeza, Melika, Rufus and Lance.
"I hope you're watching this Varn, 'cause you'd better get this through your green ugly skull... You don't own me!
— ''Terinu'', Chapter Six

is a black and white, full page web comic written by Australian native Peta Hewitt, featuring the title character, an alien boy whose race, the Ferin, were genetically engineered to serve as power sources for the Varn Dominion. Five hundred years ago they were wiped out as the races rebelled against the Dominion's control. Now the Dominion is hunting him down to recover their source of power and take the galaxy back, the space pirate who raised him wants to hunt him down to use him as her personal assassin and the Galactic Sapiens Alliance wants him either dead or dissected.

It's nice to be wanted.

Terinu: Our Hero, a fifteen year-old alien boy with an understandably touchy temper and severe trust issues after being abused half his life.

Gwendolyn Freeman: Leeza's fifteen year old cousin and a cyberglider. Bounces between being irritated at Terinu and worrying for his safety.

Lance Freeman: A Space Marine demolitions expert and cousin to Leeza and Gwen. Tended to bump heads with Terinu at first, but has since mellowed towards the boy.

General Oryon Gisko: Leader of the Galapados Warriors, a genetically engineered race created by the Gene Mage to match human aggressiveness. A nice iguana when he's not on the job.

Lady Mavra Chan: Self-styled Space Pirate noble, with an emphasis on the "Pirate" over the "Noble".

"Brutal" Brooks: Chan's second-in-command with all of her bad traits and none of her limited charm.

Princess Titalia: An Ardactavian (read: bug race) princess, currently plotting the overthrow of her mother, using Gwen as her pawn.

Admiral Erwin Blake: Chief of the United Systems Alliance fleet and determined to hunt down and kill Terinu to preserve the Alliance's safety. This makes for rather awkward relations with his daughter Leeza.