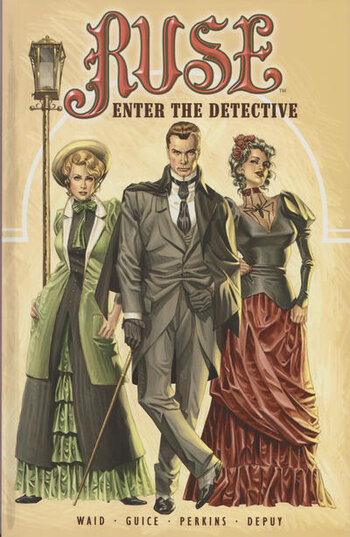 Ruse is a CrossGen comic book series by Mark Waid featuring the adventures of a Sherlock Holmes-esque detective in a Fantasy Counterpart Culture version of Victorian Britain.

Simon Archard is the great detective, an unbeatable thinking machine with no emotions (that he'll admit to) and no people skills (he's described at one point as possessing "all the crimeside manner of a cactus"). One of his quirks is that, being a devotee of rationality and scientific method, he refuses to believe in magic even as it goes on around him. It's not that he denies the phenomena (after all, what detective would get far denying his own observations?), but after studying the problem and producing a clever solution, he will also produce a complicated explanation of how it was really just a side-effect of quantum mechanics, or an interaction between drugs and the planet's magnetic field, or whatever.

Archard's Watson is his assistant Emma Bishop, who possesses all the humanity he lacks and is often called on to smooth ruffled feathers. It's revealed to the reader early on that she has an additional ulterior motive for associating with Archard, and secret magic powers that she's forbidden from using overtly. (In the scene where this is revealed, and again later, she is almost driven to using them, but chooses to trust that Archard will be able to save the day in some unexpected but awesome fashion; which he indeed does.)

As the series opens, Archard is suffering badly from boredom: his life has fallen into a rut of Police Baffled, Archard Solves Case In Moments, Yet Another Thrilling Rooftop Chase, etc. Things perk up with the arrival in town of the mysterious foreign baroness Miranda Cross, and unrelatedly (or is it?) a baffling murder that he can't solve in moments...

Like most of CrossGen's titles, Ruse was set in a small corner of a massive Shared Universe. Unlike most, it didn't make any explicit references to the Myth Arc during its run, although readers familiar with the mythos could make educated guesses about, for instance, the source of Emma's powers and the background of the recurring villain Miranda Cross.

The series debuted in 2001, and ran for 26 issues before CrossGen collapsed in 2004. Two collections, Enter the Detective and The Silent Partner, were published before the collapse.

In 2011, Ruse was revived by Marvel Comics under a new "Crossgen" imprint, once again written by Waid. Now set in Victorian England, and without the supernatural elements of the original, the four-issue mini-series nevertheless assumes that the broad strokes of the original's story are still canon, and serves as a loose sequel to it.

Not to be confused with the Video Game by Ubisoft.

The relaunched series provides examples of: