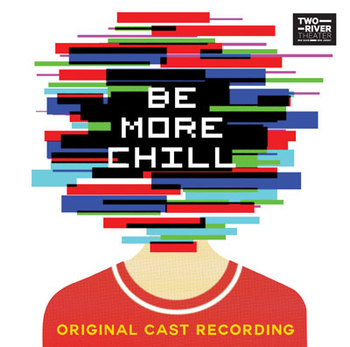 In which Jeremy learns that he should not, in fact, take a chill pill.
"Hey, Hamlet. Be. More. Chill."
— The SQUIP, "Be More Chill (Pt. 1)"
Advertisement:

Be More Chill is a musical theatre adaptation written by Joe Iconis and Joe Tracz of the book with the same name. It premiered at the Two River Theatre in Red Bank, New Jersey in 2015. It follows the life of Jeremy Heere, an average high school dork whose life gets turned upside down after he gets a Squip - a quantum supercomputer in the form of a pill that enters one's brain and instructs them on how to become cool.

Despite running for only a month in a small regional theater, it blew up in popularity on Tumblr in summer 2017 and has the makings of a modern Cult Classic. The fanbase is vocal enough to have secured it an Off-Broadway run starting in July 2018, and then a Broadway run from February to August of 2019. Its 2020 off-West End production was disrupted by COVID, but managed to move to the West End for a few showings in 2021. If you're a theater kid between the ages of 14-25, you know this show, or at least the Signature Song "Michael in the Bathroom".

Be More Chill contains examples of:

"There's still voices in my head, but now they're just the normal kind."