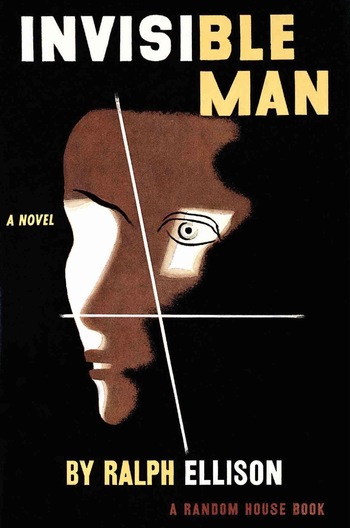 "Who knows but that, on the lower frequencies, I speak for you?"
"My God, boy! You're black and living in the South—did you forget how to lie?"
— Dr. Bledsoe
Advertisement:

The first and only completed novel by the American critic and reviewer Ralph Ellison, Invisible Man was published in 1952 and has remained very popular ever since, especially among English teachers and students of African American literature.

The plot revolves around a young, unnamed black man who is determined to rise to a position of influence, but is ignorant of the amount of lying and scheming that will take. As he bounces from one situation to another in search of power, he both hears the words and sees the actions of the various people and groups who are manipulating the racial divide.

Considered to be one of the most important American novels, not only of its time but of all time, it has been heralded for its portrayal of the horrific atrocities of racism and the rampant repression of African-American culture, in both the post-Reconstruction South and in New York City. It has also been noted for its extensive use of symbolism.

In 2017 Hulu acquired the rights to make a TV series adaptation.

Not to be confused with The Invisible Man, the Science Fiction novel by H. G. Wells, much to the disappointment of many a high school student.