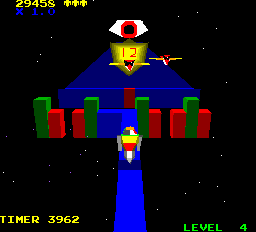 The law: No Jumping.
I, Robot is an arcade game developed by Atari and released in 1984. It was the first arcade video game to use solid 3D rendered raster graphics, and exploited it to draw its third-person views.
Advertisement:

The player controls a robot, Unhappy Interface Robot #1984, who lives in a polygonal landscape overseen by Big Brother, an all-seeing eye. In the platforming levels, the player has to run over all of the surfaces to paint them blue (at first; see Palette Swap), while dodging assorted obstacles. Furthermore, if Big Brother's eye is open when the player leaps, he is instantly disintegrated. The platforming stages alternate with short conventional shoot 'em up levels.

Players in a more relaxed mood can also "play" the game in "Doodle City", which lets the player manipulate and draw 3D polygonal objects on the screen.

No relationship to the Isaac Asimov anthology, the movie based on it In Name Only, nor the The Alan Parsons Project album.

The game demonstrates the following tropes: