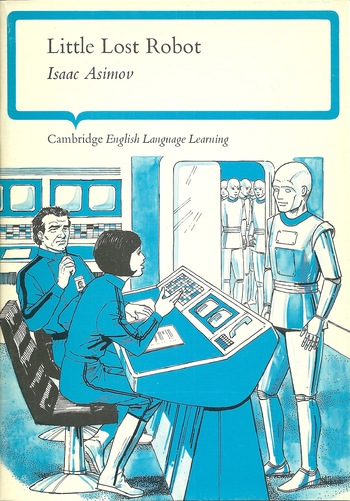 First published in Astounding Science Fiction (March 1947 issue), by Isaac Asimov. This story shows how The Genie in the Machine interprets "Get Lost!". In 1977, it was edited by Rosemary Border into a chapter book for English Language learners. It is followed by the story "Risk".

Doctor Susan Calvin, United States Robot & Mechanical Men Corporation's expert on robotic psychology, has been summoned to Hyper base. The government project on the Hyperatomic Drive is in trouble, because a prototype robot from the NS-2 series (Nestor) has been released into a general population of Nestors. What was so special about the prototype? A modified First Law of Robotics. Dr. Calvin's immediate answer is to scrap every one of the robots in that group. She's told she can't do that because it would be too expensive, causing knock-on contract losses. Fine; do they have the equipment to analyze the Nestors and discover which one has the unusual positronic design? Yes, but sharing the information with the people who would run the computations would ruin the company. Instead, she has to find the one prototype Nestor within the group of sixty-three Nestors by questioning alone.

Thorough questioning reveals that the Nestor robots are aware that there is an extra robot in their group, but they are unable to tell the difference, either. Dr Calvin designs a test, one that will have the Three Laws-Compliant robots leap into action to save a human, while the prototype robot will remain stationary. It doesn't work; the missing robot decides faster than a human can anticipate, and moves just as quickly as the unmodified robots.

With that failure behind them, Dr. Calvin designs another test, where the Third Law (self-preservation) will prevent the modified Nestor from leaping into action like the unmodified Nestors. Forewarning the Nestors turns out to have been a mistake, because it gives the modified robot an opportunity to argue the other robots into Murder by Inaction (leaping to the master's rescue would mean the death of the master and robot, whereas inactivity means only the death of the master). Again furious, Dr. Calvin rants at the characters who asked/encouraged the development of modified Three Laws robots.

With that failure behind them as well, Dr. Calvin designs another test, not sharing all the details. In this test, they forewarn the robots that gamma rays may be between them and a human in danger. If there weren't gamma rays, they'd leap into action to rescue the human, but if there is, they'd be destroyed. Naturally, based on the previous test, the robots should remain still.