Literature / Pebble in the Sky 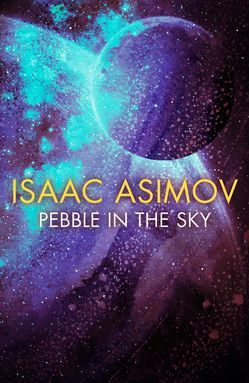 First published in January 1950 by Isaac Asimov at Doubleday, this is the firstnote (third in the internal chronological order) book in what would later be published as The Empire Novels. The first Novel that Isaac Asimov ever published, this Science Fiction speculative novel is about a contemporary man being flung into the far future by accident.

Joseph Schwartz, a retired and uneducated tailor, suddenly finds himself in the year 827 of the Galactic Era. It's a strange world; the Galaxy is inhabited, but the people of Earth are social outcasts, discriminated against because the planet is largely radioactive wasteland.

Joseph Schwartz is drawn into an ongoing web of intrigue, as Earth-born terrorists prepare a biological weapon against the Galactic Empire. Simultaneously, Bel Arvardan, a young Galactic archeologist who wishes to prove that Earth is the original homeworld of humanity, stumbles into the same conspiracy after meeting Pola Shekt, the daughter of an Earth scientist who has been pressed into the conspiracy's service. With hatred between all factions the question is if galactic catastrophe can be averted.

Pebble in the Sky was republished in Two Complete Science Fiction Adventure Books (Winter 1950 issue), Urania (issue #442, 1966 August), and several Omnibuses. An early draft of this story, called Grow Old With Me, is published in The Alternate Asimovs.

Pebble in the Sky provides examples of: