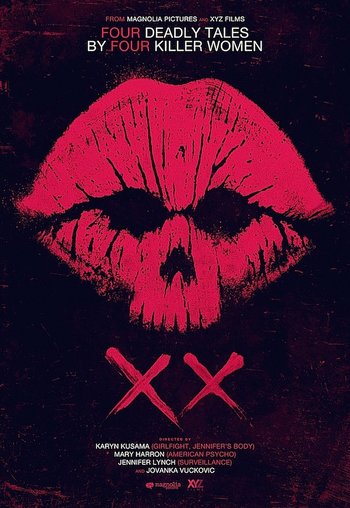 XX is a Horror Anthology Film directed by Roxanne Benjamin, Sofia Carrillo, Karyn Kusama, St. Vincent, and Jovanka Vuckovic. It stars Natalie Brown, Melanie Lynskey, Breeda Wool, and Christina Kirk. The main gimmick of the movie was that all of the four segments were directed by women.
Advertisement:
Advertisement:

The framing device that connected the segments together was a Stop Motion Animation depicting a walking dollhouse, directed by Sofia Carrillo.

It had its world premiere at the Sundance Film Festival on January 22, 2017, and was released in a limited release and through video on demand on February 17, 2017.

open/close all folders
The movie in general
Framing Device
Advertisement:
The Box
The Birthday Party
Don't Fall
Her Only Living Son