Film / My Own Private Idaho 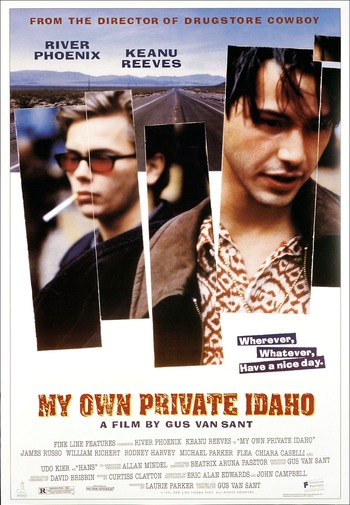 "I'm a connoisseur of roads. I've been tasting roads my whole life. This road will never end. It probably goes all around the world."
— Mike Waters
Advertisement:

A 1991 Road Trip Plot film, written and directed by Gus Van Sant, about a gay narcoleptic male prostitute named Mike (River Phoenix) who is looking for his long lost mother, along the way realizing that he is in love with his best friend Scott (Keanu Reeves), also a prostitute. Scott is wealthy, however, and only whoring himself to annoy his father, and decides to quit prostitution when he comes into his inheritance.

Part of the movie is indeed set in Idaho, but a fair amount takes part in Portland, Oregon; and Italy. Part of the plot is based on William Shakespeare's Henry IV, with Bob as Falstaff and Scott as Prince Hal. In addition, much of the dialogue between Bob and Scott is paraphrased from Henry IV.

This film provides examples of::