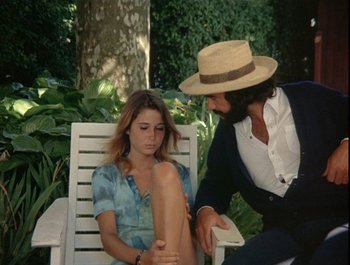 Claire's Knee (French: Le Genou de Claire) is a 1970 film written and directed by Éric Rohmer, the fifth of his Six Moral Tales, and the first after My Night at Maud's became a worldwide hit.

Jérôme (Jean-Claude Brialy) is a career diplomat who decides to spend July in his hometown on Lake Annecy in the French Alps before traveling to Sweden to marry his fiancée. He bumps into Aurora (Aurora Cornu), an old friend who is now a writer. She's staying at a house owned by Madame Walter (Michèle Montel), a twice-divorced woman with two teenage daughters, one of whom is out traveling. Jérôme meets one daughter, 16-year-old Laura, (Béatrice Romand, in her first of six Rohmer films), who visibly becomes infatuated with him. Later, Aurora discusses an idea for a novel she's had, about an older man who becomes obsessed with a younger girl, and noting Laura's interest in him, proposes that Jérôme act as a guinea pig to help her with the story, an idea he finds amusing enough to go along with.

Laura turns out to be articulate, precocious and charming, and Jérôme finds it a bit of a struggle to keep things platonic with her, before they finally realize they're Better as Friends. But matters are shaken up when her older sister Claire (Laurence de Monaghan) comes back home. A classically beautiful blonde, Jérôme finds himself drawn to her. But not really to her looks: he develops a fetish on her knee, and is sorely tempted to touch it. As the month goes on, Aurora observes both Jérôme's predicament and the two sisters as they experience their own romantic foibles.