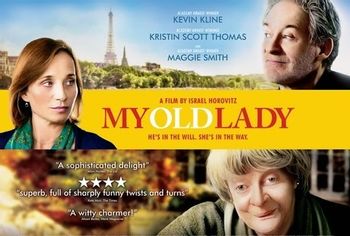 "If you do not love me I shall not be loved."
— Samuel Beckett
Advertisement:

Mathias Gold — a cynical, a down-on-his-luck New Yorker and former alcoholic — travels to Paris to sell a large, valuable apartment he inherited from his estranged father. However, he discovers an old woman, Mathilde, living in the apartment with her daughter Chloe. Mathias learns that the apartment is a "viager" — an ancient French system for buying and selling apartments — and that he will not actually get possession of the apartment until the day Mathilde dies… and that he owes her a pension of €2400 a month. Apparently, his father failed to mentioned this.

Flat broke and with no place to go, Mathilde allows him to stay in the apartment as long as he pays the rent. All the while, he butts heads with Chloe, who makes it clear that he is not welcome in her home. But the situation take a sudden turn when Mathilde unveils a secret, and how Mathias will handle this revelation.