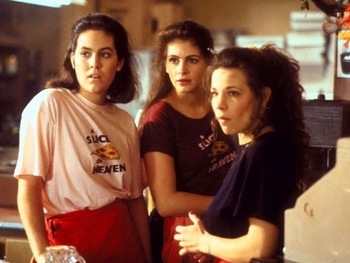 Daisy: Don't worry about me. I'm not gonna be slinging pizza for the rest of my life.
Leona: The best pizza!
Advertisement:

The film is set in the working-class Portuguese-American community of Mystic, Connecticut. Kat (Gish) and Daisy (Roberts) are sisters who, along with their best friend Jojo (Taylor), work at the eponymous pizza place run by Leona (Ferrell). Jojo is engaged to be married to Bill (D'Onofrio), who runs a fishing boat, but while she loves Bill, she's not sure she's ready to get married. Kat, the "good" sister who's been accepted to Yale and is working other jobs to help pay for college, takes on a babysitting job and becomes attracted to Tim (Moses), the man she's babysitting for. Finally, Daisy, the "bad" sister, gets involved with Charlie (Storke), a rich guy.