School Is for Losers 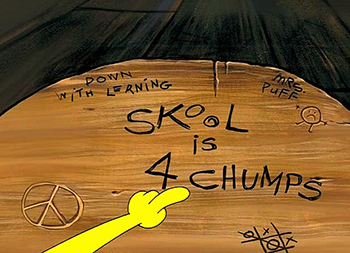 Somebody needs a little more "skool".
"You can miss out school
(Won't that be cool?)
Why go to learn the words of fools?"
— The Small Faces, "Itchycoo Park"
Advertisement:

The common attitude of many a Book Dumb character is that "cool" people don't go to school. Even if forced, they must make absolutely no effort to do well in class, because that would indicate they care about "useless" things like how to add numbers and spell correctly.

The basic idea that characters who fit this trope have is that there's some place called "the street" that teaches you everything you'll ever really need to know in life. If you're on this website, the closest you've ever gotten is the fabled Sesame Street.

There's also a group of people who oppose formalized public education as a Government Conspiracy to keep the populace dumb and conformist. Others simply see institutional education as ineffective. Or both. However, this type of person rarely shows up in media; this trope is usually used to make a character look like a comedic idiot.

Possibly justified if the character expressing this opinion goes to a Sucky School.