Film / Investigation of a Citizen Above Suspicion 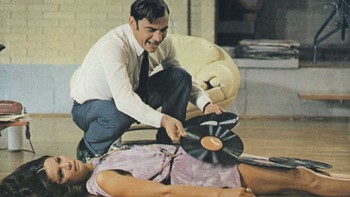 Time to get a new boyfriend.
Advertisement:

Investigation of a Citizen Above Suspicion is a 1970 film from Italy, directed by Elio Petri.

A man (Gian Mara Volonte) arrives at the apartment of his gorgeous lover Augusta Terzl (Florinda Bolkan), in a city somewhere in Italy. She asks "How will you kill me?" and he says "I'll slit your throat." Then they go to bed. Kinky sex? Well, yes...until he actually murders her by slitting her throat.

The man then leaves deliberate clues all over the woman's apartment, leaving his fingerprints everywhere, deliberately stepping in the woman's blood to leave a footprint, even going so far as to purposely leave fibers from his tie behind on the woman's fingernail. He passes a neighbor as he leaves the apartment building and makes sure to speak to the neighbor so said neighbor will remember him. Then the man goes to his day job.

As a police inspector. Namely, chief of homicide.