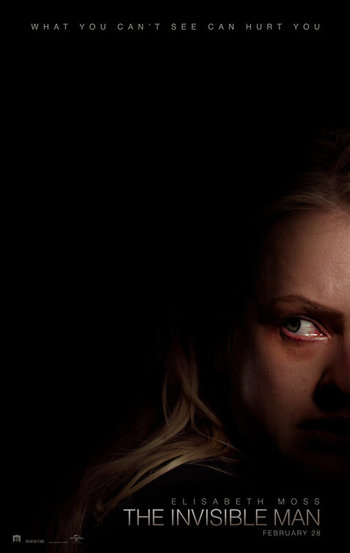 Not pictured: The Invisible Man.
Doesn't mean he isn't there...
"One night, I was sitting, and I was thinking about how to leave Adrian. I was planning the whole thing in my mind. And he was staring at me, studying me. And without me saying a single word, he said that I could never leave him. That wherever I went, he would find me. That he would walk right up to me and I wouldn't be able to see him, but that he would leave me a sign, so that I'd know he was there."
— Cecilia Kass
Advertisement:

The Invisible Man is a 2020 sci-fi horror film written and directed by Leigh Whannell (Saw, Upgrade), based on the novel of the same name by H. G. Wells. It is the second film adaptation of the source material following James Whale's 1933 version starring Claude Rains in the title role. note There have been many films and television series based on and/or inspired by The Invisible Man but this is the first theatrical release to officially adapt the book, albeit very loosely, since the 1933 iteration.

Cecilia Kass (Elisabeth Moss) is attempting to move on with her life after the death of her abusive ex, Adrian Griffin (Oliver Jackson-Cohen). After a series of unexplained events, Cecilia comes to believe that Adrian, a brilliant scientist specializing in optics, is not in fact dead, but has discovered a way to turn himself invisible to stalk and gaslight her. That said, Adrian has left Cecilia a significant amount of money in his will, but she can only obtain it by proving that she's mentally competent to his estate's executor. Trying to convince the authorities that a supposedly dead man is harassing her through advanced technology is not helping her case.

The film was originally developed as part of the shared "Dark Universe" alongside other upcoming Universal Horror remakes, with Johnny Depp in the title role. After two false starts, Universal announced that it would suspend the plan for the shared universe and instead redevelop each movie as standalone. Leigh Whannell was brought in to direct and write and Blumhouse Productions to produce the film. Instead of a direct remake, the film reimagines the original plot against the backdrop of a domestic abuse story and consequently the titular character now serves as an antagonist. Whannell has stated that the film was not made with any shared universe in mind.

Compare with Paul Verhoeven's 2000 film Hollow Man, which was Inspired by… the same source material but isn't an official adaptation. Not to be confused with Universal's upcoming

(and unrelated) remake of The Invisible Woman, directed by and starring Elizabeth Banks.

The Invisible Man contains examples of: