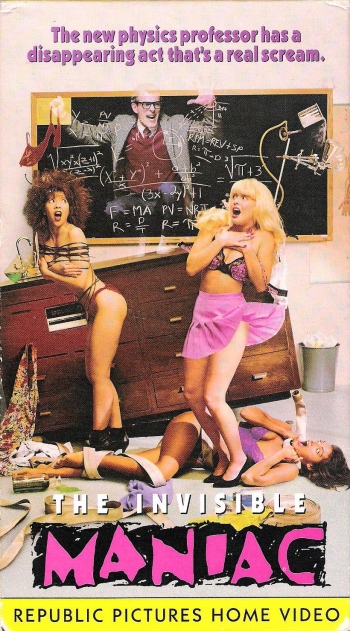 Don't bother trying to save these students, Dr. Dornwinkle. They're a lost cause.
Advertisement:

This schlocky Direct to Video 1990 flick is a fairly straightforward Slasher Movie, though the bucketloads of gratuitous nudity, sex, and voyeurism in this movie also make it a teen sex flick verging on sexploitation as well.

When he was a child, the budding young scientist Kevin Dornwinkle's atrocious mother caught him peeping with his telescope at a nubile young woman doing a strip tease while dancing to some music in her bedroom. Hateful woman that she was, she proceeded to inflict numerous gaping wounds on his vulnerable little psyche, ranting about what a disgusting little pervert he was; how all women are evil; and how he was never to look at, talk to, or even think about them ever again; and somehow finishing this rant by laughing maniacally in his face.

Twenty years later, Kevin Dornwinkle is a respected, if rather shy, nerdy, and sexually repressed physicist. Unfortunately, when he attempts to demonstrate to a symposium of world-famous fellow physicists a new breakthrough he claims to have made in making himself invisible, his serum fails to produce the intended effect, and they mock him mercilessly. This proves to be a terrible mistake: cruelly reminded of his mother's abuse, he goes on a Roaring Rampage of Revenge, slaughtering four of the other eleven scientists present. After he is arrested (newscaster Tammy Edwards helpfully informs us), he is ruled incompetent to stand trial and sent to the State Institute for the Criminally Insane (in some unspecified state).

Incredible as it may seem, all three of the boys in his class are Jerk Jocks, and all five of the girls are stupid sexually attractive cheerleaders who spend a lot of time working on their cheers between classes so they can flash a lot of undergarments at the viewers and hit the showers (which just so happen to have an enormous air vent running right between them and the gym through which the guys can peep at them) a lot. Also, the school's young principal Mrs. Cello is an insatiable nymphomaniac seeking to make every male within reach (teachers and students alike) one of her conquests... with the possible exception of The Unintelligible school janitor Henry, a poor low-brain-powered gomer the students regularly harrass and mistreat much the same as they do to Kevin.

As the students are eventually to learn the hard way, teasing and tormenting their shy and nerdy new physics teacher is a bad, bad idea; for at night, to help ease his pain and rectify his atrocious past, Kevin Dornwinkle has been busy correcting his mistakes, and has finally perfected his invisibility serum into a working formula. At first, he merely uses it to get a much closer look at those girls in the showers and sometimes cop a feel, but with his invisibility serum having the side effect of boosting all of his darker emotions, and everyone (including Mrs. Cello) mistreating him, it's only a matter of time before they finally push him too far.