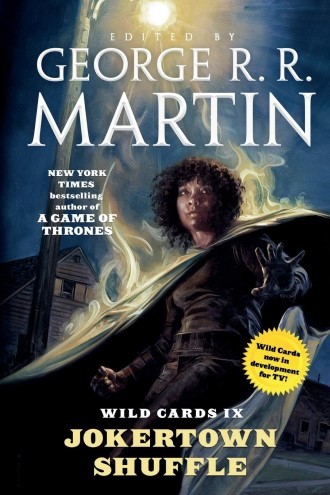 Jokertown Shuffle is the ninth Wild Cards book and the second in the "Jumpers" trilogy, continuing the events of One-Eyed Jacks.

New York City is gripped in fear as the Jumpers crisis escalate. Where once the Jumpers, special Wild Card victims who can switch minds with anyone they look at, were content with acts of vandalism and establishing their own society on Ellis Island, aka the Rox, they have since escalated to kidnapping, robbery, extortion, and murder. Their favorite tactic is to jump into someone wealthy, steal all their money, and ransom the body back.

At the center of crisis are the two opposing leaders of the Rox: Bloat, governor of the Jokers, and Blaise Tachyon, head of the Jumpers. While Bloat wants to establish a society for Jokers free from prosecution Blaise wants power over others. The book covers several interconnecting stories involving different people and their relation to the Rox: