Film / Into the Night 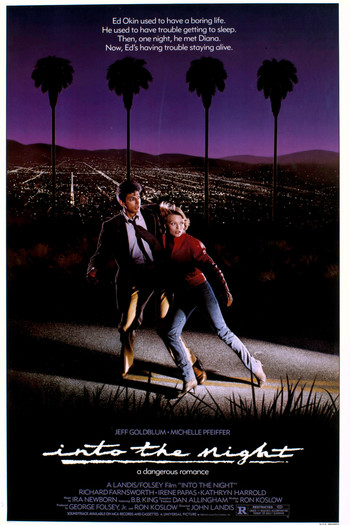 Into the Night is a 1985 comedy-thriller directed by John Landis, and starring Michelle Pfeiffer and Jeff Goldblum.

Briefly, Ed Okin (Goldblum) is an insomniac aerospace engineer who encounters Diana (Pfeiffer), an Iranian smuggler's girlfriend/mule, in the parking garage of Los Angeles International Airport, inadvertently rescuing her from her fiancé's homicidal crime family and getting drawn into a very complicated jewel heist plot which unfolds over the following 24 hours and sees the imperiled duo running all over the City of Angels.

As with many other Landis films, character actors and cameos abound: Dan Aykroyd plays Ed's friend Herb, Vera Miles plays villainess Joan Caper, David Bowie plays a scuzzy hitman, and many movie directors have minor and bit parts — with Landis himself as one of the Iranian villains.

Not to be confused with the 2020 Belgian Netflix series of the same name, which is a sci-fi thriller about a passenger airline desperately trying to avoid the sun.