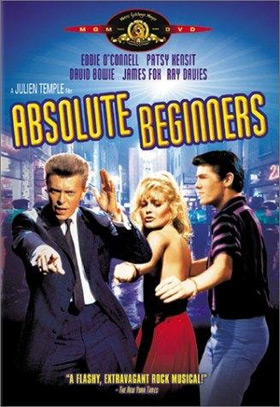 "I remember that hot, wonderful summer. When the teenage miracle reached full bloom and everyone in England stopped what they were doing to stare at what had happened. The Soho nights were cool in the heat, with light and music in the streets. And we couldn't believe that this was really coming to us at last. Nobody knew exactly why. But after so many dreary years of bombs and blitz and slow rebuilding; no sugar, no jam, nothing sweet anywhere; with the whole English world dressed in gray, it seemed, forever. Suddenly life broke out in warm colors again, so young and beautiful that a lot of people couldn't stand to look at it. For the first time ever, kids were teenagers. They had loot, however come by, and loot's for spending. And where there's loot, trouble follows."
— Opening narration
Advertisement:

Absolute Beginners is a 1986 musical drama directed by music video director Julien Temple, and based on the cult novel by Colin MacInnes. Set in London in 1958, it chronicles the story of Colin (Eddie O'Connell), a struggling young mod photographer, and Suzette (Patsy Kensit), his fashion model girlfriend. Suzette loves Colin, but is more ambitious than he is, so she gets a job working for Henley (James Fox), a top designer, and through chance, ends up being the showcase of his latest campaign, which is cashing in on the new teen craze. Colin reluctantly ends up working for Harry Charms (Lionel Blair), a pop promoter, but is afraid of selling out. He also catches the eye of Vendice Partners (David Bowie), an unscrupulous businessman. Meanwhile, the neighborhood Colin lives in — Notting Hill — seems like a perfect combination of energy, music and cultural harmony. But there's trouble brewing as a group of white supremacists start causing trouble, especially when Colin finds out who's behind them...

While that may sound like an issue drama, the movie is in fact a musical, featuring not only Bowie, but also music by Ray Davies, Gil Evans, and Sade, among others. Despite heavy promotion by MTV, the movie was a flop on release, but has since gained somewhat of a cult following, despite criticism of how different it was from the novel.