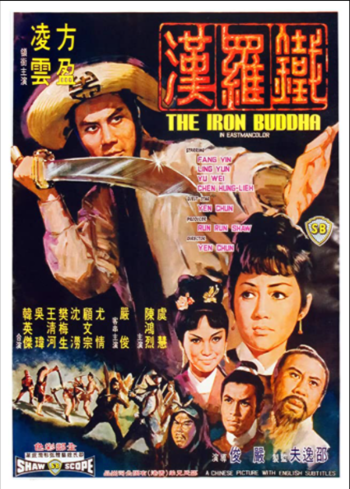 Turns out that he shouldn't. Three years later, Xiao Tian-zhun reveals his true colours as he intends to use his newly-attained skills in martial arts to rob, pillage, rape, and commit all sorts of atrocities, one of the first things he did which is to execute a complete massacre of Master Liu's school and family. And it's up to Master Liu's best disciple, Luo Han - a revered swordsman known as the Iron Buddha, returning from a quest of his own, to stop Xiao Tian-zhun.

Described by its director as Shaw Brothers' attempt to reconstruct the "Heroic Swordsman" wuxia archetype, for once with the spotlight on the opposing side, this film explores how attaining ultimate power in the jiang hu can bring out the true, dark nature in the blackest of hearts...

The Iron Buddha contains examples of: