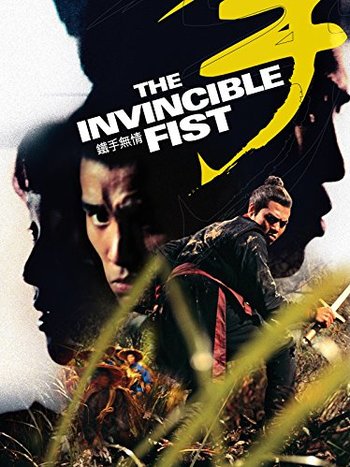 His fist is invincible.
Advertisement:

The Invincible Fist is a 1969 Shaw Brothers Wuxia film directed by Chang Cheh, starring Lo Lieh and David Chiang, notable for being director Chang Cheh's last collaboration with Lo Lieh, and first with David Chiang - the latter which will form an "Iron Triangle" with Chang and another veteran badass, Ti Lung, starring together in multiple films for the next 8 years.

Lo Lieh and David Chiang are the brothers Tieh Wu-ching and Tieh Er-lang, a pair of swordsmen and imperial investigators hired to track down a legion of bandits who had stolen a cache of treasure belonging to the government, but their quest is delayed when Tieh Wu-ching falls for a blind girl in a tavern who ends up being the bandit leader's daughter.