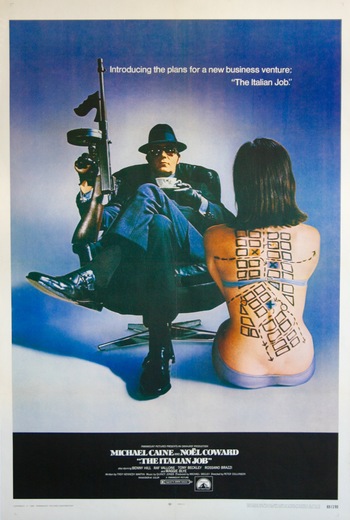 ♫ This is the self-preservation society... ♫
"You're only supposed to blow the bloody doors off!

"
— Charlie Croker, after Arthur blows up the panel truck they've been practicing with
Advertisement:

A 1969 film starring Michael Caine as a gangster, Noël Coward as a criminal kingpin and Benny Hill of all people as a computer expert. Caine is Charlie Croker, who is let out of prison and immediately starts planning to go to Italy rob a van full of gold. The film involves one of the best car chases in the history of cinema (with Mini Coopers) and one of the most famous lines in cinema, when someone uses slightly too much explosive on a van during a test and is reminded "You're only supposed to blow the bloody doors off!"

It’s a highly popular film and is often repeated on British TV. Years later an episode of MacGyver (1985), "Thief of Budapest", lifted most of the film's iconic car chase, using creative editing to transpose it from Turin to Hungary! Years after that, a Driver-style driving action game based on the movie was released on the original PlayStation.

You're only supposed to blow the bloody tropes off!!