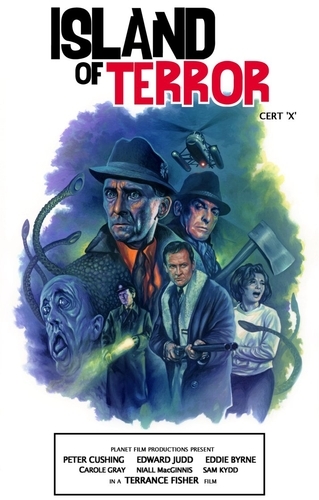 On the remote Petrie's Island, farmer Ian Bellows goes missing while walking home through the woods one night. His concerned wife goes to the locate constabulary, whereupon Constable John Harris heads out to locate the wayward farmer... only to discover him dead in a cave with his skeleton having been completely liquefied and sucked out. At his wit's end, town doctor Reginald Landers journeys to London to seek the assistance of his old friend, pathologist Brian Stanley (Cushing), fearful that a bizarre new bone-dissolving disease is running rampant on Petrie.

Along with Stanley's hunky bone expert colleague David West and West's rich girlfriend Toni Merrill, the gang travels to the island to investigate further, discovering that the sudden epidemic of boneless people and animals might in some way be connected to the work of reclusive cancer doctor Lawrence Phillips, who has set up shop in the island's requisite creepy Victorian-era mansion. As it turns out, Phillips and his assistants are all dead, and just as boneless as Ian Bellows.

The gang quickly realizes that Phillips' efforts to develop a Cure for Cancer have led to the creation of nigh-unstoppable silicon-based organisms called "Silicates" which live by eating bone matter, and soon Stanley, West and Toni are in race against time to find a means of destroying them before they overrun the entire island and kill everyone.

Not related to Terror Island.