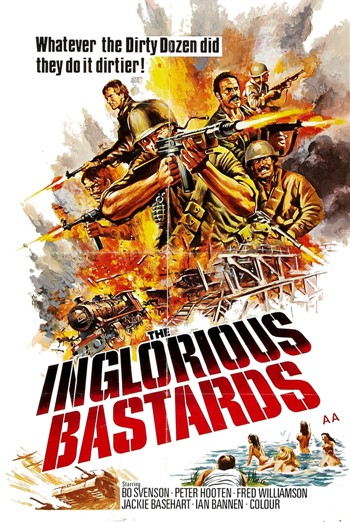 The Inglorious Bastards is a 1978 Italian film starring Bo Svenson and Fred Williamson and directed by Enzo G. Castellari. It has little to do with the similarly-named Inglourious Basterds, although Quentin Tarantino admitted that his film was influenced by the original and gave Castellari a Remake Cameo as a German general.

During World War II, a group of Allied prisoners are in the process of being transferred to a prison. They include Fred Canfield, a black soldier who murdered a white sergeant for a racial insult, deserter Berle, mutineer Tony, thief Nick Colasanti and Army Air Corps pilot Lieutenant Robert Yeager, who is in trouble for flying his plane to England to visit his girlfriend there. Given into the custody of an abusive MP sergeant, the group, and others, are being driven to their destination when two things happen: firstly, their truck gets a flat tire, and secondly, a German plane attacks the all-too-tempting stationary target. This allows the prisoners to get the drop on their captors. They murder the sergeant, but let the other MPs go.

Yeager, as the ranking officer, takes command, and aims to get the group across the French border into neutral Switzerland. Along the way the group meets a fellow deserter from the opposing side in friendly German soldier Corporal Adolf Sachs, who agrees to help guide the Americans to the border. After several misadventures, which sadly includes the death of Adolf, the "Inglorious Bastards" mistakenly kill a group of American troops disguised as German ones, who were on a commando mission to destroy a Nazi train. The soldiers' leader, Colonel Buckner, demands that the Bastards fill in for his dead men.

Yeager refuses unless Buckner grants them a pardon. Although Buckner initially refuses, when he and Canfield are captured by the SS, the Bastards rescue them, earning the Colonel's respect. He finally agrees to grant the Bastards a pardon if they'll help him destroy the train, which, it turns out, is carrying an experimental rocket whose circuitry Buckner wants.