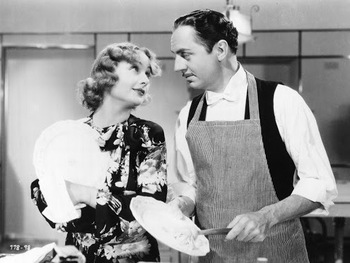 The rich girl Irene with her protégé... er, butler.
"All you need to start an asylum is an empty room and the right kind of people."
— Alexander Bullock
Advertisement:

My Man Godfrey is a 1936 Screwball Comedy film directed by Gregory La Cava, based on the novel 1101 Park Avenue by Eric S. Hatch. It stars William Powell and Carole Lombard, and was the first film to receive Academy Award nominations in all four acting categories; it was also a favorite of Roger Ebert, who included it on his Great Movies List. It got a remake in 1957 starring David Niven and June Allyson, but that version is generally seen as inferior to the original, and has been pretty much forgotten.

The Bullocks are a wealthy New York City family consisting of gruff businessman Alexander (Eugene Pallette), his pampered wife Angelica (Alice Brady), and their two spoilt daughters. One evening, the family participate in a scavenger hunt at a party full of their well-off socialite friends and have to search for items in order to win prizes. Rich Bitch daughter Cornelia (Gail Patrick) and her Spoiled Sweet sister Irene (Lombard) are after the rarest find of them all: a "forgotten man".

The sisters visit a junkyard full of homeless men who have been affected by The Great Depression. There, they find Godfrey (Powell), who is offended by the game and refuses to be taken by Cornelia to be teased by the rich. Irene, meanwhile, is guilty about her intentions and later offers him a job as a butler for their family's mansion, much to Cornelia's annoyance.

When Godfrey arrives the next morning, he is welcomed by an exhausted maid to a wild mansion full of snide commentators, eccentric women, and social drunkards. It only gets even more confusing when Irene develops a crush on him, while her father is struggling to keep his finances. Behind the scenes, the envious Cornelia is suspicious of Godfrey's history after spotting him getting friendly in a cafe with locals on his day off and intends to find out his true intentions.