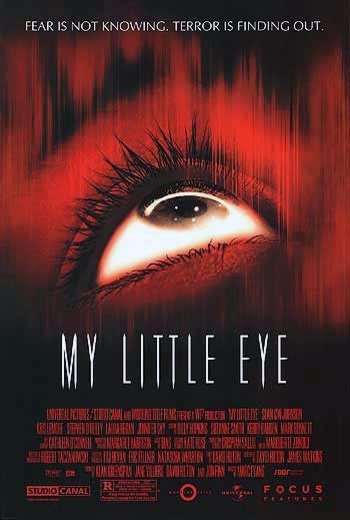 "Fear is not knowing. Terror is finding out."
— The movie's tagline
Advertisement:

My Little Eye is a 2002 British horror film directed by Marc Evans. It has been described as Big Brother meets Friday the 13th, which makes the concept of Dead Set, in a way (since that, too, is in the horror genre), older than they think.

The film begins with five young competitors—Emma (Laura Regan), Matt (Sean Cw Johnson), Danny (Stephen O'Reilly), Charlie (Jennifer Sky), and Rex (Kris Lemche)—auditioning for an unnamed Reality TV show. The rules state that they must live in an isolated country house for six months in order to win one million dollars. The catch? If anyone leaves, everyone loses. It continues at the last few weeks, where the people think about what they miss and what they plan to do with the million dollars.

However, the stakes are rising as their rations grow shorter, the heat is shut off, and Danny's grandfather dies. Rex thinks that it could be The Company, but no one else suspects a thing. Tensions rise, and a mysterious package appears containing a bottle of champagne and a shotgun. Later, a mysterious young man named Travis (Bradley Cooper) joins the group for a day, and he and Charlie have sex. Danny is accused of taking Emma's items and makes a gift for her, and that's where things start to go downhill, to put it mildly.

The film relies on twists. Spoilers will be unmarked.

This film provides examples for the following tropes: