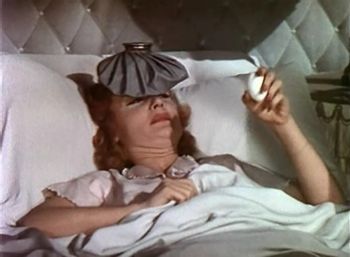 Fake it 'til you make it.
Advertisement:

Nothing Sacred is a 1937 Screwball Comedy directed by William A. Wellman, starring Carole Lombard and Fredric March.

Hazel Flagg (Lombard), a young woman from the dull small town of Warsaw, Vermont, is suffering from a fatal case of radium poisoning. Wally Cook (March), a newspaper reporter who is deep in his editor's doghouse, goes to Warsaw to interview Hazel for a story. Just as he arrives there, Hazel finds out she is not dying (it turns out her doctor is well-meaning but incompetent. He'd seen so many cases of radium poisoning that he diagnosed her too hastily after finding she was anemic — which is all that was really wrong with her). Not wanting to miss the free trip to New York that Wally's paper is offering her, Hazel keeps the secret of her perfect health to herself. She rapidly becomes the most talked-about person in town, while falling in love with Wally, and panicking at the thought of her secret being exposed.