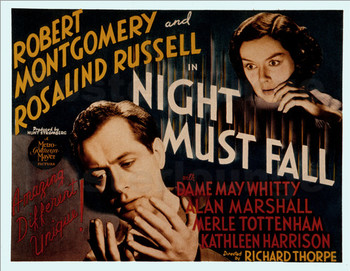 These are the hands of a strange man.
Advertisement:

Night Must Fall (1937) is a film adaptation of the Emlyn Williams' thrilling play of the same name, directed by Richard Thorpe.

Olivia (Rosalind Russell) is the beleaguered niece and secretary for her aunt, Mrs. Bramson (Dame May Witty), who’s an exacting and grumpy old woman. One day the old lady takes a fancy to page boy, Danny (Robert Montgomery), who’s a charming, common fellow. Olivia has a bad feeling about him and suspects him of being the murderer of a local woman who has gone missing. But Olivia finds herself intrigued by the romanticism of such excitement and doesn’t take herself out of danger even when every passing day makes Danny more suspicious.

Not to be confused with the 1964 film of the same name.