Film / Nothing to Lose 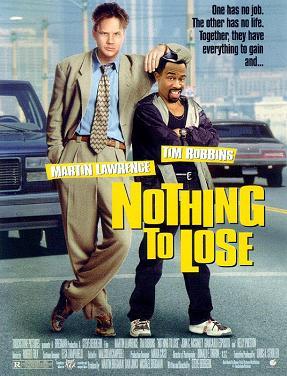 "Boy, did you pick the wrong guy on the wrong day."
Advertisement:

Nothing to Lose is a 1997 action-comedy film starring Tim Robbins as Nick Beam and Martin Lawrence as Terrence Paul "T-Paul" Davidson. It was written and directed by Steve Oedekerk.

Nick Beam is having a very bad day. His life was going swimmingly until he came home to discover that his wife is apparently having an affair with his boss. Now on the edge of a nervous breakdown, Nick drives away, trying to gather the shattered remains of his life.

T-Paul is about to have a very bad day. He just found the perfect mark to rob—some schlub in his SUV barely paying attention to his surroundings has wandered into the ghetto, so he hops in the car and tries to carjack him. That schlub is Nick Beam, and this was his breaking point. He peels out with the hapless carjacker in tow.

As the man with no job and the man with no life are forced to bond, they hatch a scheme to get back at Nick's boss by cleaning out an office safe containing hundreds of thousands of dollars, while trying to dodge a pair of robbers who think Nick and T-Paul are horning in on their turf. Wacky Hijinks ensue.