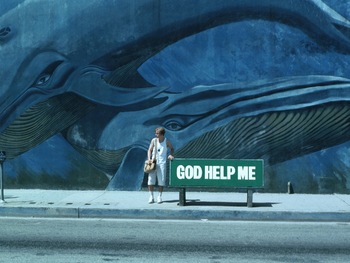 "L.A. is like... nowhere. Everybody who lives here is lost."
— Dark Smith
Advertisement:

Nowhere is a 1997 movie written and directed by Gregg Araki as the third part of his "Teen Apocalypse Trilogy", following Totally ***ed Up and The Doom Generation.

It's a bizarre, surreal and sex-saturated black comedy set in a vaguely futuristic and apocalyptic Los Angeles, filled with petty, pretty, vacuous, bisexual, drug-addled teen friends. Throughout the movie, they get abducted by aliens, killed, or commit suicide amidst lots of Sex, Drugs and Rock & Roll as they try to get to an exclusive, rave-type party for more of the same. It is described as "90210 on acid" on the VHS cover box, which is apt.