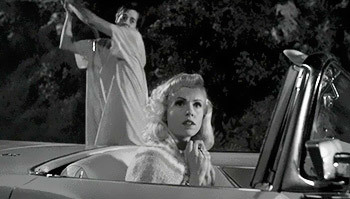 "Jimmy! Jimmy, come back! I didn't mean to bite—"
Advertisement:

Teenagers enjoy making out in cars. This is probably because they expect that no one will see them, and they won't see anyone. However, teenagers at Make-Out Point ironically tend to be the first witnesses of the alien invasion, or the zombie apocalypse, or the dead body at the bottom of the cliff. Quite often, they will be brutally murdered to show that the Monster of the Week means business. Why? Perhaps Rule of Funny. Perhaps they are considered Acceptable Targets. (Bonus if they get shot at.)

This is something of a Dead Horse Trope nowadays, considering that it is parodied more than it is used. Plus, health and safety prevents such things happening nowadays, with traffic regulation orders enforcing road signs such as "No motor vehicles" at the locations. Truth in Television - the Department for Transport have a fair few enforced at cliff-faces. Nevertheless, as you'll see under Real Life, this has happened, as a few serial killers have made it their preferred modus operandi.

Always involves a Make-Out Point and Auto Erotica, or at least teenagers contemplating such.