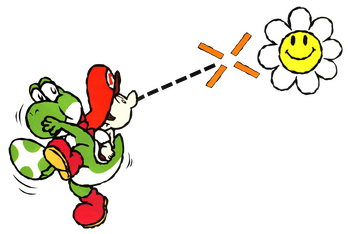 There must be better ways to pick up flowers.
Advertisement:

A Video Game trope that refers to the phenomenon of collecting items by throwing or shooting something at it. Spotted a floating item out of your reach, hovering over a wide expanse and over a Bottomless Pit? Throw a rock at it and the item mysteriously comes into your possession! It makes perfect sense!

As nonsensical as this trope seems, its implementation in various games is more for the player's convenience if anything. It also lends itself to the potential of some puzzles, forcing you to rely on it as an Outside-the-Box Tactic.

A common trope in Platform Games and an integral one in Rail Shooters, where shooting is usually your only option. So feel free to open fire on those Health Kits when you need them. Since this trope is often the exception rather than the rule, aversions are too common to list, unless the aversion itself is surprising within the game.