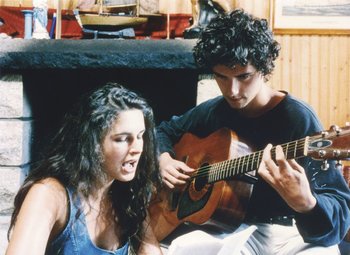 A Summer's Tale (French: Conte d'été) is a 1996 French film written and directed by Éric Rohmer. It's the third of his Tales of the Four Seasons.

Gaspard (Melvil Poupaud) has finished up his mathematics studies and decides to spend the summer on the coast of Brittany before he starts a new job. He's also a guitarist and composer and expects lots of time alone to work on his music. Instead, the somewhat shy, introverted Gaspard finds himself in a completely unexpected predicament: juggling the affection of three different women.

Margot (Amanda Langlet, who previously played the title role in Pauline at the Beach) is an ethnology student working part-time as a waitress. She and Gaspard have great personal chemistry, but have decided they're Better as Friends. Solène (Gwenaëlle Simon) is beautiful, with long, dark, curly hair. She's very affectionate and shares an interest in music, but she's also feisty and demanding. Léna (Aurelia Nolin) is his longtime friend, with whom he has a difficult relationship, owing to her fickle nature. She's supposed to arrive any day from overseas, but doesn't seem like she'll ever actually show up.

As summer winds down, Gaspard knows he will have to make his final choice between the three. But fate doesn't seem to want to make that easy for him.