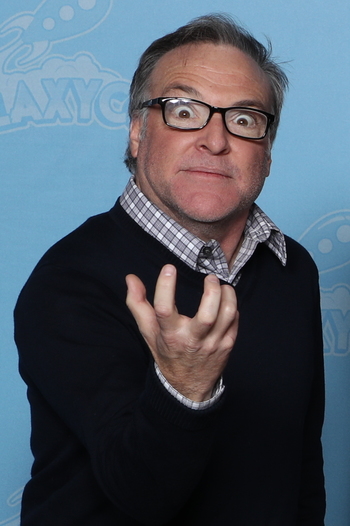 Highly popular voice actor known for his high, effeminate voice, Richard Steven Horvitz (born July 29, 1966) is usually type casted as very crazy and dimwitted characters who tend to do a lot of screaming. If they're small, nasal, manic, and slightly hammy, there's a good chance Richard Horvitz is involved somewhere.

His best known works include the voice of the original Alpha 5 in Mighty Morphin' Power Rangers, Power Rangers Zeo, and Power Rangers Turbo, Raz in Psychonauts, Billy in The Grim Adventures of Billy & Mandy, Daggett in The Angry Beavers, Kaos in Skylanders, the Berserker in The Darkness video game, the title character Zim from the show Invader Zim, Rodney J. Squirrel in Squirrel Boy, and as Orthopox in the Destroy All Humans! series. He was also Alan Eakin in the obscure Carl Reiner film Summer School, one of his first (and few) on-camera performances.note Funnily enough, another future voiceover artist was involved with the movie, E.G. Daily — though she wasn't in the film itself, she did sing the "Mind over Matter" song featured in the film and appeared in a music video with many of the film's actors, including Horvitz.

While many of Horvitz's characters scream, he has said himself that the hardest role he's ever had to play was Zim, since Zim's speaking voice is screaming.