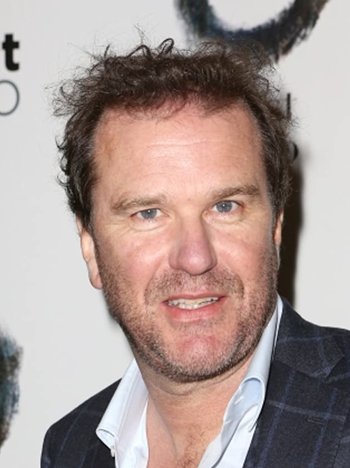 Douglas Hodge (born 25 February 1960 in Plymouth, England) is a British actor, occasional stage director, and (on the side) Singer-Songwriter with an exceptionally diverse track record of roles.

Initially a teenaged stand-up comic specializing in celebrity impressions, he went on to study at the Royal Academy of Dramatic Arts, though he ultimately dropped out. His stage career began in The '80s and by the end of the decade he had the roles of Sir Andrew Aguecheek, Hamlet, Romeo, Coriolanus, and Edmund under his belt. In the ensuing decades, he has also played Pericles, Leontes, and Titus Andronicus for the National Theatre, Royal Shakespeare Company, and Shakespeare's Globe, respectively.

By the dawn of The '90s he was appearing in serial dramas and Made For TV Movies for ITV, Channel Four, and The BBC, most significantly as Dr. Tertius Lydgate in the 1994 BBC adaptation of Middlemarch. He continues to do so to this day, along with guest appearances in various series. He was also a regular in two shows, Capital City (1989-90) and Red Cap (2001 pilot, 2003-04 series), and had recurring roles in Outnumbered (as the American therapist Brick) and Penny Dreadful (as the Sympathetic Inspector Antagonist of Seasons 2-3). In 2017 he played the owner-curator of the titular "Black Museum" in Black Mirror.

He has performed in BBC Radio adaptations of such novels as Great Expectations (as adult Pip) and Women in Love. Between two Big Finish Doctor Who audios — Urban Myths (the bonus story on Exotron) and The Son of the Dragon — he voiced a total of five roles, including a lead character in each. He's also had a fair deal of feature film work, albeit mostly minor roles (i.e. The Descent Part 2, Robin Hood (2010), Joker) since the early 1990s.

It is his stage work, however, that most of his reputation rests upon. In 1993 he began a decade-plus association with Harold Pinter, appearing in productions of seven different Pinter plays over 1993-2000 and directing The Dumb Waiter and Other Pieces in 2004. Shortly after this period, his career began to turn an unexpected corner. While he had performed in a few musicals in The '80s and been a musician/songwriter for years — performing low-profile gigs in pubs even as his acting career progressed — his singing talents were new to many observers when he played Nathan Detroit in a West End revival of Guys and Dolls in 2005. (Pinter even picked on him a bit for doing a light musical comedy.) That same year, he released his first album, Cowley Road Songs, which was followed by Night Bus in 2009.

In 2008, Hodge's performance as Albin/Zaza in a revival of La Cage aux folles won him the Olivier Award for Best Actor in a Musical. The production was given a Broadway transfer in 2010 and Hodge went with it, making his New York debut and winning the Tony Award for Best Performance by a Leading Actor in a Musical. Since that triumph, his stage career has blossomed further while retaining its variety, going from misanthropic solicitor Bill Maitland in John Osbourne's Inadmissable Evidence in 2011 to a return to Broadway as the title character in Cyrano de Bergerac in 2012 to Willy Wonka in the 2013 West End musical Charlie and the Chocolate Factory.

In Fall 2015, he directed the Broadway debut of Clive Owen in a revival of Harold Pinter's Old Times.

Tropes associated with this actor/musician: