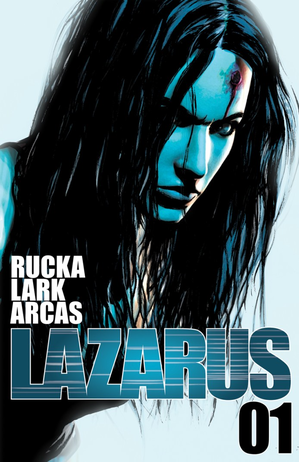 Forever Carlyle.
"...my armies are our shield against our enemies, against the other families
...but Forever is the tip of my sword...
...and like the finest blade...
...she is beautiful...
...and she is lethal...
...and she is precise..."
— Malcolm Carlyle
Advertisement:

It is the future and the governments of today have ceased to exist. Corporations have become the new ruling bodies of the world, dividing the planet into different "territories" that are under their direct control and ownership, instituting a new form of feudalism. The Families are the heads of those corporations; those who provide services for the Families are referred to as Serfs, having been "elevated to Service". Everybody else is Waste, cared little for by those in power, with their only hope for a better future to be "Lifted". Food is scarce, so each Family keeps their seed banks secure, doling out supplies only to those Waste who have properly registered as servants of the Family. To serve as the Family's shield, sword, and bannerman, each Family can modify one individual to be their "Lazarus."

Forever Carlyle is the Lazarus for the Family Carlyle, the Family which controls the area of the United States west of the Mississippi River, and Canada west of Hudson Bay. Forever performs the dirty work for her siblings and her father, when one night, thieves break into a Family guest residence where she is staying, and shoot her multiple times in a desperate search for food. On the same night, commandos from rival Family Morray assault the Carlyle seed bank with the help of someone on the inside, nearly managing to reach the seed vault. In the aftermath, war looms between the two Families.

There is something else going on, however. Something deeper. There are schemes and plots and Forever is stuck in the middle.

And she is starting to question her orders completely...

The book is currently published in a 64-page quarterly format, with each of these being roughly equivalent to three normal issues. In January 2018, Rucka responded to a fan question by saying that the series has a "definite" ending planned, and in a June 2020 fan chat, clarified this under the new schedule to probably "13 issues, or four, five more years".

Also in 2018, Green Ronin published an RPG based on the setting for their Modern Age system called World of Lazarus; the new quarterly comic issues are each scheduled to have several pages of supplemental content for the system.