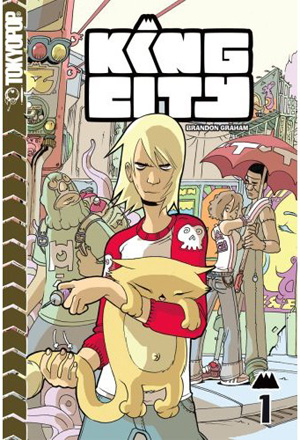 From left to right: Pete, Joe and Earthling, Anna, and Max.
Advertisement:

Meet Joe. He picks locks. He picks his nose. He has a fat cat (Earthling J.J. Catingsworth III, or "Earthling" for short) that, with a shot of "cat juice," can do just about anything Joe needs him to. He's back in his hometown of King City after two years training to be a catmaster, and things get weird from there.

A very strange comic in 12 issues by Brandon Graham. Originally published by Tokyopop, then by Image Comics after Tokyopop ran into trouble.