Comic Book / Laura Dean Keeps Breaking Up With Me 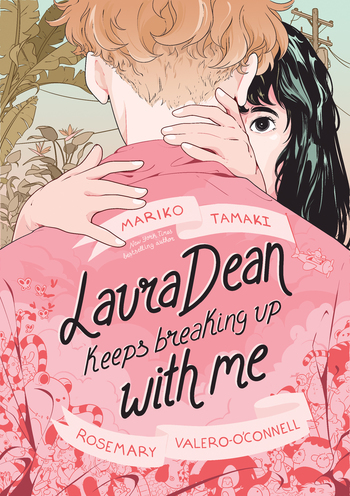 All Freddy Riley wants is for Laura Dean to stop breaking up with her. The day they got back together was the best one of Freddy’s life, but nothing’s made sense since. Laura Dean is popular, funny and SO CUTE … but she can be really thoughtless, even mean. Their on-again, off-again relationship has Freddy’s head spinning — and Freddy’s friends can’t understand why she keeps going back.

When Freddy consults the services of a local mystic, the mysterious Seek-Her, she isn’t thrilled with the advice she receives. But something’s got to give: Freddy’s heart is breaking in slow motion, and she may be about to lose her very best friend as well as her last shred of self-respect. Fortunately for Freddy, there are new friends, and the insight of advice columnist Anna Vice, to help her through being a teenager in love.

Laura Dean Keeps Breaking Up with Me is a YA Graphic Novel written by Mariko Tamaki (Hulk (2016), Skim, This One Summer) and illustrated by Rosemary Valero-O'Connell. It follows Frederica "Freddy" Riley throughout her struggles with her on-again, off-again relationship with the eponymous Laura Dean. The novel was first published by First Second Books on May 7, 2019.