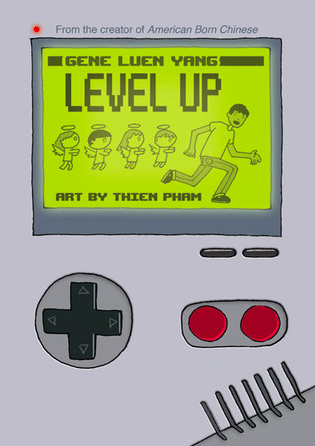 Written by Gene Luen Yang and illustrated by Thien Pham, published in 2011, Level Up is a Graphic Novel about a troubled Chinese-American college student torn between following his father's wishes and his own love of video games.

When Dennis is a child, he falls in love with video games, but his strict father always forbids him from playing them. After his father dies of liver cancer while he is in high school, Dennis becomes so addicted to video games that it wrecks his academic performance in college and is about to ruin his chances of getting into med school. But one day, like a miracle from heaven, four angels arrive on the doorstep of his apartment and get the dean to accept him back in. They'll do anything to get him into med school and onto the path of becoming a gastroenterologist. But is this really Dennis' destiny?

No relation to the video game or the TV show.