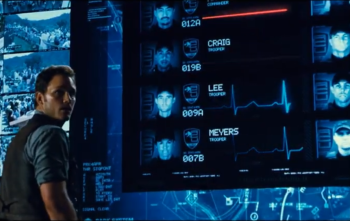 [Hudson looks at the vitals monitors in the APC]
Hudson: Hey...hey, look. The Sarge and Dietrich aren't dead, man. Their signs are real low but they ain't dead, man!
Vasquez: Then we go back in there and get them!
[they start arguing about the rescue]
Ripley: You can't help them! You can't. Right now, they're being cocooned just like the others.
— Aliens
Advertisement:

Whether it's for a malady or simply to observe their overall health and performance, it occasionally becomes necessary for a character's vital signs, especially their heart rate (EKG), to be monitored remotely when that character can't stay in a medical facility. This is often done via some sort of tracking device worn on their body, implanted in them, or incorporated into another piece of tech they're using. While this can be done with individuals, it's more common for this type of monitoring to be done on team/crew members that are on an away mission. In the event that the team encounters something that presents a threat, the drama is escalated by seeing team members' vital signs go crazy as they encounter the danger and/or flatline should things turn lethal. Red Shirts are particularly prone to being involved in this kind of situation, but the dramatic tension can be escalated by involving Mauve Shirts, whose injuries/deaths provide more emotional punch.

One way that this is done is through a station where the vitals of each team member are prominently displayed, usually accompanied by a camera feed from one or more of them. This allows the person monitoring the station and other relevant people to track the health of the team and, if needed, order them to withdraw should their lifesigns start going awry. This station is usually located either in the crew's Home Base or its Awesome Personnel Carrier, and the team's Mission Control is often in charge of it.

Note that this trope is specifically for monitoring someone's signals through scientific (or at least sci-fi) means. Monitoring through fantastical means (such as a Hive Mind or other Psychic Link, or sensing a disturbance in the Background Magic Field) would be covered by My Significance Sense Is Tingling. Compare Snowy Screen of Death.