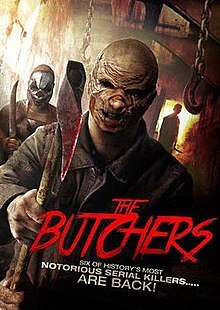 The Butchers (also known as Death Factory and The Factory) is a 2014 horror film directed by Steven Judd and written by David Dittlinger and Stephen Durham.

Strangers on a bus find themselves fighting for their lives when one of them reads from a Gothic book and brings to life six dead serial killers who proceed to hunt them down one by one.

Tropes used in The Butchers include: