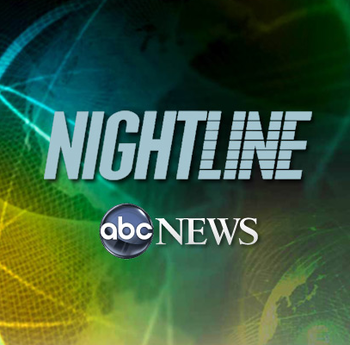 When the American embassy in Tehran and its employees were taken captive and held hostage by the Iranian government, ABC started a nightly late-night newscast, America Held Hostage, in which it would do a recap of what had happened that day relating to the hostage crisis, as well as other news that could fit that wasn't able to make the evening news. For a short period it was hosted by Frank Reynolds, host of the regular nightly newscast, until it was permanently hosted by Ted Koppel.
Advertisement:

As America Held Hostage the title included the day indicating the number of days the crisis had been continuing. This kept pressure on the Carter administration to try and get the hostages freed, eventually resulting in a botched rescue attempt. The show was later re-titled Nightline.

After 444 days, when the Carter administration was voted out of office, and the Iranians released the hostages just as Ronald Reagan was being inaugurated, ABC decided to keep Nightline around, turning it into a newsmagazine devoted to in-depth stories on a different topic each night. This gave ABC its first late night program offering, which could then compete with NBC's The Tonight Show, and later on, CBS's Late Show with David Letterman. The show was notably capable of holding its own against its comedic competitors, especially on nights with major stories.

Koppel retired after the November 22, 2005 episode. Afterwards, Martin Bashir, Cynthia Mc Fadden, and Terry Moran took over as the new hosts of Nightline, with Bashir and McFadden initially hosting from Times Square, and Moran hosting from Washington. At that time, the show shifted to a multi-topic format, and also began to veer more towards featuring pop culture more often. However, major political stories and interviews helped sustain its viewership, continuing to beat the more comedy-oriented late-night trappings of its rivals.

Nightline originally served a unique niche in news broadcasting, but by the late-2000's and The New '10s, its relevance had begun to wane with the shift of cable news to opinion-based primetime shows with in-depth stories, and late-night talk shows took over the top spot. Initially airing at 11:35 p.m., it switched time slots with Jimmy Kimmel Live! in 2013. As of 2014, the show is hosted by Byron Pitts and Juju Chang, alternating nightly. With the coronavirus pandemic in the news, Nightline returned to its previous time slot as a temporary move, and began to pivot back towards its original concept (with Pitts even acknowledging that they were trying to do for the pandemic what the show originally did for the Iran hostage crisis).