Literature / On Heroes and Tombs 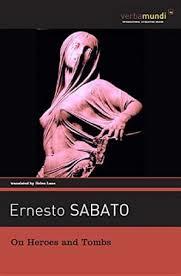 ''There exist some fictions through which the author tries to free himself from an obsession that is unclear even to himself. For good or for bad, these are the only ones I can write."
— Ernesto Sábato, note on the first edition.
Advertisement:

On Heroes and Tombs is a 1961 novel, a chaotic and surreal book written by Ernesto Sábato set in Buenos Aires, it begins with a note from a local newspaper, telling of the suspicious circumstances in which a girl murdered her father and then set herself on fire.

The story has at its center the ill-fated romance between Alejandra Vidal, a young, beautiful yet emotionally unstable woman, last heir of a decadent Argentinian family, and of Martín del Castillo, the shy, homeless teenager that sees her as the only reason to keep on living. This tale, told as a conversation between Martín and his friend Bruno years after Alejandra's suicide, serves as the background for a dark examination of the nature of hope and the futility of human contact, complete with Freudian undertones, mythological allegories and some serious analysis on the nationality of Argentina.

The third chapter, called "Report on the Blind" has sometimes been published as a completely separate book. This section, narrated by Fernando Vidal, father of Alejandra and resident schizophrenic/Magnificent Bastard, breaks with the realism and narrative line of the rest of the book by interrupting the story with a chaotic and existentialist description of Fernando's delusional mission. He believes blind people are secretly a sect of non-entirely-human creatures that control everything and everyone. Only he can stop them, maybe not definitely, but it is his destiny to try. It is Fernando's mission to infiltrate this dangerous association that has secret, unlimited powers. In the process, however, he tells us about the evolution of his insanity and psychopathy, along with his ultra-nihilistic views on reality and some little details that suggest the true dark secret behind the plot. Namely that Fernando and Alejandra had a incestuous relationship before her relationship with Martín caused her to precipitate into madness, via killing his father and then killing herself.

Oh and sometimes, between the storylines, there is a historical narration of the flee of the forces of General Lavalle from the traitor soldiers of Oribe, at the Argentinian civil war. The kick of this story is that Lavalle, the heroic commander, dies halfway through but his troops keep the flight through the desert; decided not to let the enemy take the hero's head and plant it on a lance.

This is the second book of Sábato's trilogy, preceded by existentialist novella The Tunnel and followed by Mind Screw extraordinaire "Abbadon the Despoiler". "Writing on the Blind" has been adapted both to movie format and comic book format.

Contains example of the following tropes: