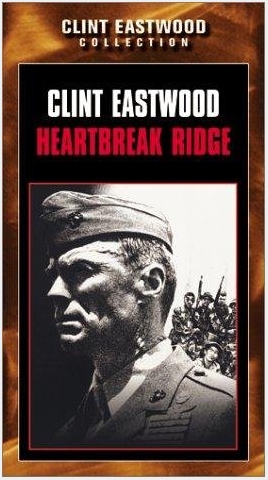 Judge Zane: Sergeant Highway, drunk and disorderly. Fighting in a public establishment. Urinating on a police vehicle?
"Gunny" Highway: Well, it seemed like the thing to do, sir.
Advertisement:

Clint Eastwood stars in this 1986 film as Gunnery Sergeant ("Gunny") Tom Highway, a highly decorated but trouble-prone Korea/Vietnam veteran who is getting close to military retirement, and seen by the younger Marines as an anachronism. He is sent to train an unruly Recon platoon, who think they run things because their former sergeant was soft on them. His methods rub his CO the wrong way, but he gets great results and a handful of laughs as well.

The film was apparently endorsed by the military... until they saw the first cut. There was too much graphic/sexual-overtone-laden language and negative portrayal of military personnel, so they pulled their support. Many military members vouched for the authenticity of the character types shown, though.