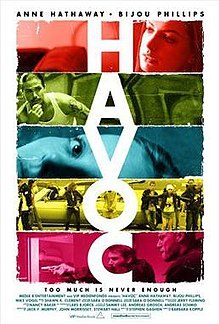 Havoc is a 2005 film starring Anne Hathaway. It is about a group of rich Los Angeles teenagers that inspire them to be gangsters. It gained some controversy since Anne Hathaway starred in The Princess Diaries and Ella Enchanted before it.

The movie provides examples of the following: